By Briana Darcy | Sep 8, 2016
Thank you Lindsay for sharing your story so that the rest of us can relate to you and be inspired by you. It takes a lot of courage to be so transparent to so many.
Namaste,
Briana

Meet Lindsay, Instructor at Beyond Barre Pensacola
Back in February, I made a decision that was a long time coming: to eat better, exercise, and shed a few pounds. I didn’t intend to put embarrassing photos of myself in my own bathroom or pics of my abs on the Internet. Almost two years ago my doctor told me I should think about losing weight. It hurt to hear, especially because I have been active and relatively thin most of my life, but 30 hit and I learned you can’t have cheese, dessert, AND wine every evening! I was also scared. Anyone who has ever set a weight loss goal understands the fear of failure and anticipation of shame that you didn’t hit the mark you wanted to. On top of that, I have never even tried to lose weight in a healthy way. In my early twenties I would go through cycles of alternating bulimia and severe food restriction because I had a really distorted view of my body. As an adult I’m comfortable in my own skin but I was still worried that it would be all too easy to take things to an extreme or renew the hateful self-talk the brought on my eating disorder.

By grace and woo-woo twin powers my awesome sister decided literally the same day that she also wanted a healthier life for herself and her family. I’ve been incredibly inspired by her commitment and encouraged by her solidarity. Like Morgan says, 80% of weight loss is in the kitchen and I have had much more fun than I would have thought preparing nutritious foods (#jarsalad #desksalad #instapot) at home. The second step was finding fitness that I LOVE thanks to Beyond Barre Pensacola (#bodybybriana). People tell you to try things until you find the thing that you really love and I always thought that was a platitude from people who genuinely enjoy exercise (#whoareyoueven #mymom @carolpmyers)

BUT after my first class I was totally hooked! I have recruited all my friends to try it and I tell them that you will know after one class if you love it or not. It’s maybe not for everyone but if it’s for you, you will understand why people say it’s an addiction! After my first class I thought, “when do I get to go again?!” Which I can promise has never happened with another workout! It’s a whole body workout, a lot of isometric motion,never boring, and still challenging even though I go around four times a week (and now teach three times a week!). I also challenge anyone who thinks that small motions and relatively small weights can’t tone your muscles or make you stronger- I am so much stronger and barre has transformed my body in ways I thought were genetically impossible. For the first time in my life I actually love my legs and thighs! I’d like to think that’s a radical statement for a woman, though it shouldn’t be! If you stick with it, you will discover what I and many other Beyond Barre clients have- that it really changes you.

And although I am really proud of myself for losing weight and gaining muscle it’s very bittersweet- some of you know that Sarah and I have been trying to conceive and it hasn’t happened yet. Another reason I wanted to lose weight was for a healthy pregnancy that, in February, I was sure would have happened by now. But that will come in its time and meanwhile I am so grateful for the extra energy, the family of barre-istas I see almost daily, the encouragement I can give my sister in return, and knowing that I am stronger every day. Strength in one area of life often translates to other areas. Committing to myself has made me more committed in every area of my life and I am grateful for it.

I just wanted to share this to encourage others who are intimidated by their goals, feel like they are slogging along without progress, or who want to make a change but are scared to take the first step. I am with you! #transformationtuesday #onward #feelthefearanddoitanyway #barresohard

Next article - PilatesStyle Magazine: No More Excuses with BeyondBarre DVD’s! » 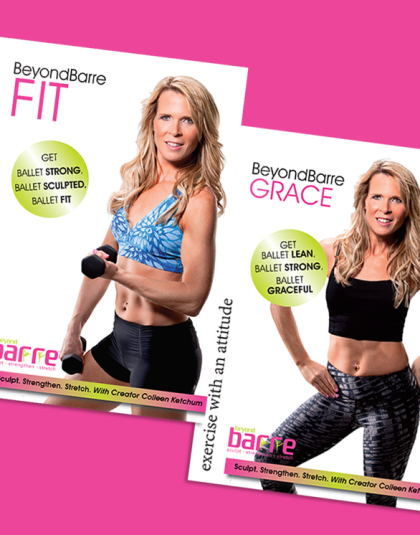